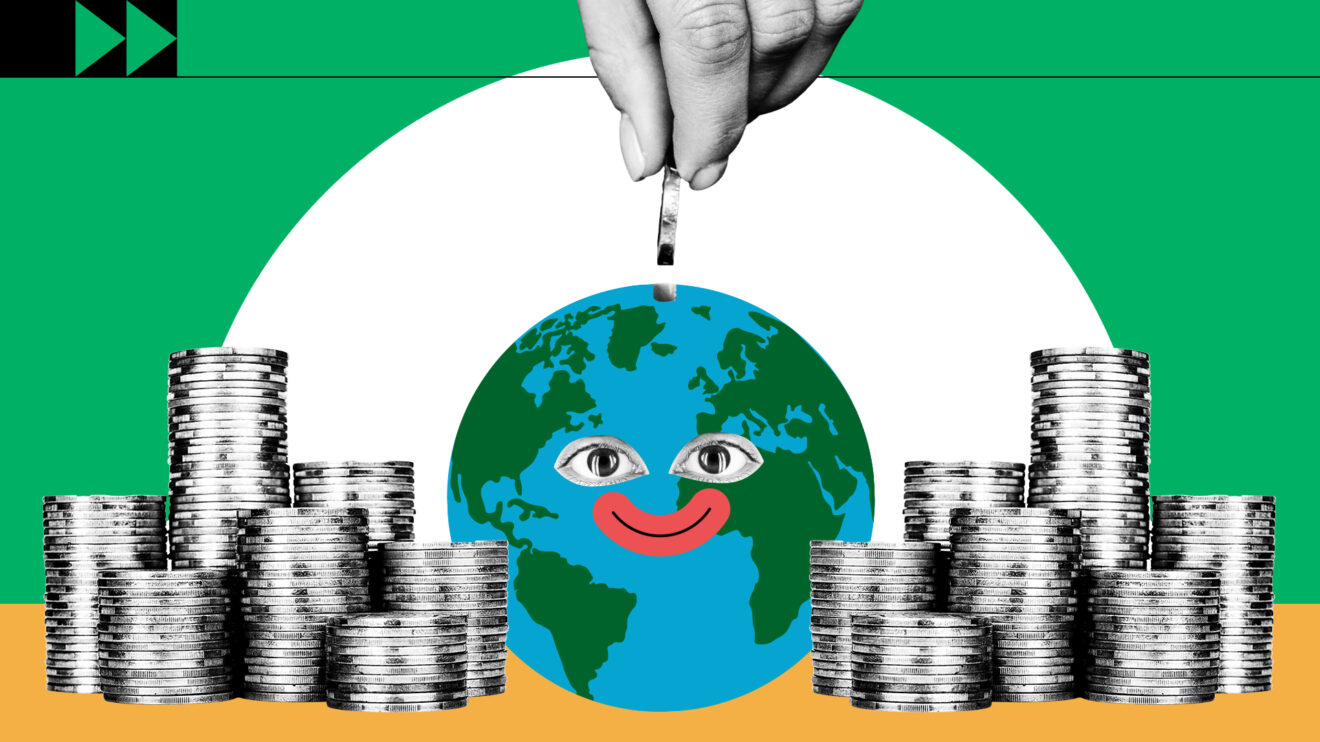 This year’s United Nations Climate Change Conference “COP 27” in Sharm El-Sheikh is held against the backdrop of the ongoing threats to the environment and lives of all people on Earth, as a result of the global impacts of climate change. It has become impossible to reduce its impact or adapt to it without taking urgent and drastic measures.

As the talks address plans to mitigate the effects of climate change by reducing or preventing the emission of greenhouse gases, and mechanisms for adaptation to climate change, a more important issue is evolving. This issue is related to the annual promise that developed countries – especially the most polluting countries – pledged to provide $100 billion annually to the countries most affected by these practices; a pledge that has never been fulfilled. It is an issue that is expected to be the focus of extensive discussions at COP 27.

According to the United Nations, climate change, through extreme weather events such as tropical cyclones, desertification, and sea level rise, is causing costly damage to countries. The intensification of these “natural disasters” is the result of increased emissions of greenhouse gases, most of these emissions come from rich industrial countries. This makes developing countries – often the most affected – assert that they must receive compensation.

In his speech, Monday 7 November 2022, during the opening session of the presidential part of the Climate Conference, the President of Senegal and the current Chairperson of the African Union, Macky Sall, stressed the need to strengthen all commitments to address the repercussions of climate change. He also stressed that the previously allocated $100 billion is no longer sufficient and that it must be increased to $200 billion, enabling us to achieve the desired goals. Sall called on the polluters to bear the cost of confronting the planet with the urgent dangers that result from it.

Egypt is one of the most countries vulnerable to the negative effects of climate change on many sectors, including coasts, agriculture, water resources, health, population, and infrastructure, although it is one of the least responsible for global greenhouse gas emissions, at 0.6% of the total world emissions.

According to the updated national report submitted by the Egyptian government to the Secretariat of the United Nations Framework Convention on Climate Change, the country faces severe risks affected by climate change. It is expected to cause a decrease in the flow of the Nile to Aswan as a result of the impact throughout the Nile Basin.

The Nile Delta is also one of 3 hotspots that are highly vulnerable to mega-delta areas by 2050. It is estimated that sea level rise could reach about 1.0 m by 2100, threatening to inundate many coastal areas in the Nile Delta, North Coast, and Sinai. This will drown at least 1% of Egypt’s area, as most of its population lives in only 5.5% of its total area.

More than 30% of the Nile Delta is low land, which faces many risks such as erosion and floods while providing three-fifths of Egypt’s production of food, and projections indicate a decrease in the cultivated area to about 0.95 million acres (8.2% of the cultivated area in Egypt) by 2030 due to the effects of climate change. The delta is expected to lose up to a minimum of 30% of its food production by 2030.

Saltwater intrusion from sea level rise, lower recharge rates, and higher evaporation rates as temperatures rise will expand areas of groundwater salinization and estuaries. This will reduce the availability of fresh water suitable for drinking and irrigation.

Accordingly, in its updated national report, the government confirmed its need for $246 billion until 2030, to implement its plan, which is distributed over sectors such as industry, energy, housing, petroleum materials, waste, transportation, environmental resources, and tourism.

Financial pledges and a proposal for a fund for losses and damages. But no progress in the implementation

The term “damage and loss” dates back to 1991, when it was coined by the Alliance of Small Island States during the climate negotiations in Geneva, with the proposal of an insurance scheme against rising sea levels that would include costs for industrialized nations.

In 2010, the richest countries pledged $100 billion annually for 10 years to help developing countries adapt to the effects of climate change. This includes providing farmers in developing countries with drought-resistant crops or paying for flood facilities. In 2013, during the 19th Climate Summit in Poland, the International Mechanism for Loss and Damage Associated with the Impacts of Climate Change was established with the aim of addressing and addressing this issue. Although years have passed, little has been achieved in this regard.

During last year’s COP 26 climate conference in Glasgow, Scotland, negotiators rejected a proposal by members of the Group of 77 and China, an influential negotiating bloc of more than 100 developing countries, to create a formal financial facility on climate loss and damage, establishing a ‘Glasgow Dialogue’ to pave the way for further discussions on financing in a manner that is ‘inclusive and open, but not mandatory.

During the same summit, the major countries renewed their pledges to quickly implement the “Climate Finance Implementation Plan”, to secure $100 billion in “assistance” to the countries most affected by the effects of climate change, by 2023, but it has not yet been implemented.

She stressed that developing countries need about $300 billion annually to face climate change by 2030, stressing the need to make progress in issues related to adaptation to climate change.

Discussions on the establishment of a loss and damage fund have not yet translated into reality, while the UN Special Rapporteur on the promotion and protection of human rights, Ian Fray, believes that there are major developed countries that are very concerned about this, and look at this issue from the perspective of what the polluter will pay.

He stresses that the countries most affected by climate change and suffering the costs must deal with these costs themselves and that it is time for the big countries – the main emitters – to stand up and say, “We have to do something, we have to make a contribution to these weak countries.”

The risk index is on the rise, and the contributions are less than expected

Historically, developed countries bear the greatest responsibility for emissions of so-called global warming, as between 1751 and 2017, the United States, the European Union, and the United Kingdom were responsible for 47% of cumulative carbon dioxide emissions, compared to only 6% of emissions caused The countries of the African continent and South America are complete.

Nevertheless, developed countries are still slow to make financial contributions to mitigate the impact on the most affected countries in Africa, Asia and South America.

The Organization for Economic Cooperation and Development, which monitors the financing process, indicated that the rich countries paid in 2020 nearly $83 billion, at a rate higher than in 2019, by 4%, but the financial contribution was less than the agreed pledge.

The “Association of Loss and Damage”, which includes researchers, activists, and decision-makers from around the world, stated that 55 of the eight “Group of Twenty Most Fragile” countries, which are 8 developing countries, including Kenya, the Philippines, and Colombia, suffered climate-related economic losses that exceeded half a trillion dollars in the first two decades of this century.

The losses were not only economic, as cultural and archaeological areas were in danger of disappearing, including indigenous and tribal communities and vulnerable local groups.

Obligation, cooperation or perdition… Urgent action is a necessity

United Nations Secretary-General António Guterres, speaking at the Climate Summit talks in Sharm el-Sheikh, Monday, November 7, 2022, called for an agreement between the world’s richest and poorest countries to accelerate the transition from fossil fuels and speed up the financing process needed to ensure that poor countries help reduce emissions and deal with the inevitable effects of global warming.

Guterres stressed that the countries gathered in Sharm el-Sheikh to attend the climate summit are facing a defining moment, as they must choose between working together now to reduce emissions or condemning future generations to face a climate catastrophe. He explained that humanity has two options: cooperation or perishing, calling on the two largest economies in the world – the United States and China – to assume their responsibilities towards this urgent issue.

The Egyptian Center for Economic and Social Rights calls for the need for a binding international mechanism to hold the major countries accountable and the most polluting of the environment accountable for the implementation of their pledges to protect the planet, with the imposition of sanctions on them in the event of non-compliance with these pledges quickly.

The Center stresses that the proposed financial mechanism should be classified as compensation for the countries most affected by the repercussions of climate change, and not as “aids”, in order to prevent any manipulation or circumvention in the implementation of these pledges, with the proposal to establish ministries of climate change, responsible for monitoring activities polluting the environment, and holding those responsible to account whether they are entities or people.

The Center believes that the responsibility to protect the planet rests with everyone, and its effects are not limited to its polluting surroundings only. The policies taken by the richest countries in polluting the environment, in turn, affect the lives of citizens in the farthest region of the world in the same size, and perhaps more seriously.

He stresses that with the high risks of climate change and the neglect of the richer countries to assume their responsibilities towards compensating those affected by their practices and reducing carbon dioxide emissions, poor communities will continue to bear the consequences of this disaster, while the deadly effects resulting from it will worsen, in the absence of any serious and binding action in this regard.