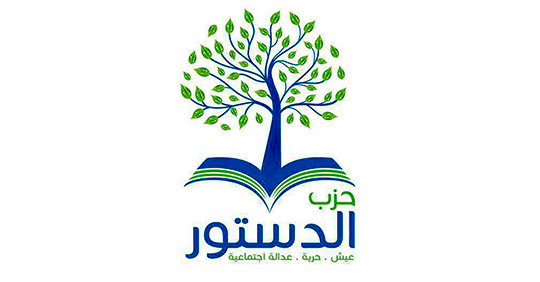 The Arabic Network for Human Rights Information (ANHRI) and the Egyptian Center for Economic and Social Rights (ECESR( said today that the arrest of four members of the legitimate opposition party “Dostour” against the backdrop of objection to the initiation of steps towards the overthrowing of the Constitution, or the so-called constitutional amendments, appears to be part of arrests campaign launched to silence and intimidate those opposing such amendments. This campaign has equated those who are affiliated with official parties and exercise their legal right to peaceful objection with those who may resort to violence to voice their rejection to the amendments.

According to a statement released by Dostour Party, the police campaign began by arresting (the party member Gamal Fadel from his house in Aswan governorate at dawn on Friday. Hours later, Helal al-Masry was arrested from his house in Cairo, then in the evening of the same day, Ahmed al-Rassam, the party’s media officer, and Ramadan Mohamed were arrested in front of the party’s headquarters in Cairo).

Despite the fact that the four people are affiliated with an official and public party in which they practice their peaceful and legal work in accordance with the Constitution, they were all arrested, sending a strong message to all political forces and parties that showing any objection to the attempts to overthrow the Constitution may leads to imprisonment and police prosecution. Such a matter takes off the fig leaf of a regime that uncovers its real face by adopting police practices and attempting to silence those who defend the rule of law and respect the Constitution approved by 98% of voters in 2014.

The two human rights organizations, ANHRI and ECESR, said: “We believe that a large majority of Egyptians oppose these proposed amendments that deal the social contract a fatal blow and turns Egypt to the individual law-state after it was actually so. Will the security forces mobilize their forces to arrest millions of Egyptians who reject these amendments?! It won’t happen; such arrests campaign targeting opponents will rather constitute new evidence proving the police nature of the regime in Egypt. It will also provide a documentation of such crimes and their perpetrators until it is the time of legal accountability.”

ANHRI and ECESR added:” There is no alternative to respecting the rule of law and the constitution, and there is no immunity for anyone who tries to turn Egypt into a state that appears to be actually owned by one party or one person.”

The two organizations affirmed their adherence to their choice of supporting the rule of law as well as supporting every citizen who assertively maintains his right and exercises it legally and peacefully, on top of them the four Dostour members.

The  Egyptian Center for Economic and Social Rights (ECESR)

A new verdict in favor of one of the victims of Jumaat Al-Ghadab, january 28,2011
The Egyptian Center: “The Supreme Constitutional Court Commissioners” recommended that the cassation court is not the competent judiciary for considering the appeals against Journalists’ Syndicate elections