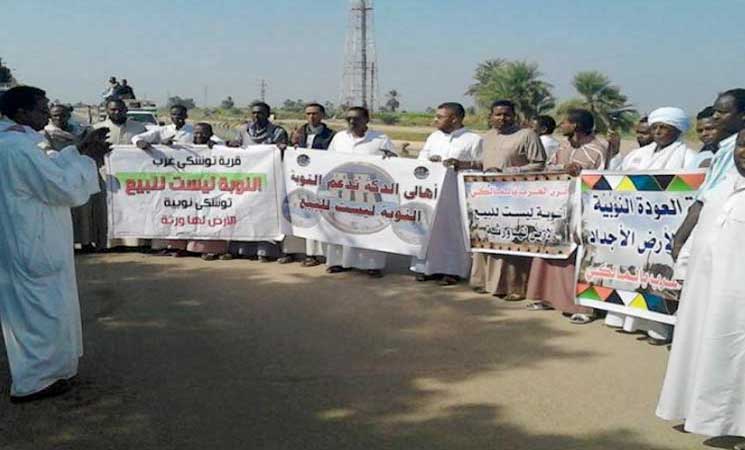 Thirty-two Nubian activists on trial for peacefully demanding their constitutionally enshrined ‘right of return’ to their ancestral lands are expected to face a final verdict tomorrow March 13, to be issued by a State Security Emergency Court in the Aswan governorate. The 32 peaceful activists face up to five years in prison with no possibility of appeal if convicted.

The undersigned organizations demand the immediate release of the defendants and the dismissal of all charges against them. We further appeal to the Egyptian state to uphold its constitutional obligations towards Nubian citizens instead of violating their constitutional rights.

Article 236 of Egypt’s Constitution recognizes the Nubian right to return to their homelands in the south of Egypt, requiring the state to uphold this right within ten years. Yet since ratifying the Constitution in 2014, the Egyptian state has reneged on its legal obligations stipulated therein by expropriating and selling Nubian land. In response, Nubians peacefully marched with dufouf (traditional drums) on Nubian Unity Day in September 2017, demanding their rights and denouncing the Egyptian state for transgressing its own Constitution.

The protesters condemned unjust governmental decrees, most recently presidential decrees 444 of 2014 and 355 of 2016. The former declared 16 of 44 Nubian villages to be military border zones and denied Nubians access to them, while the latter expropriated Nubian land for development.  The Commissioners’ Panel of the State Council recently recommended overturning decree 444.

State security forces responded to Nubians’ peaceful demands for their legitimate rights with violence. Twenty-five activists were arrested and charged with inciting protests, participating in an unauthorized demonstration, possessing publications harmful to national unity, disrupting public safety, obstructing traffic, and receiving foreign funding. Twenty-four of the detained were taken to al-Shalal Security Forces camp in Aswan and interrogated in the absence of their lawyers.

After an investigation lasting nearly three months, the Aswan Public Prosecutor referred the defendants to the notorious State Security Emergency Court. Several of the detainees went on hunger strike to protest their unjust detention, and one of them, Gamal Sorour died on November 5, 2017. Prison authorities withheld his diabetes medication for days and delayed his referral to hospital after he fell into a diabetic coma. After the first hearing, the 24 defendants were released on bail. Two additional hearings took place in December 2017, when defence lawyers’ motion to transfer the case to a regular court was denied.

Eight more activists were arrested during peaceful demonstrations staged by Nubian youth condemning Sorour’s death and the imprisonment of their comrades. They were referred to the initial case, bringing the total number of defendants to 32. At the next hearing on January 30th  2018, the court adjourned pending a ruling on February 27th; the ruling was then postponed again for March 13th.

The undersigned organizations stand in solidarity with the Nubian people; we support their legitimate demands and their constitutionally guaranteed “right of return” to their original lands. We call for a presidential decree returning the Nubians to their villages along the banks of Lake Nasser, from al-Shalal in the north to the Egypt-Sudan border in the south, and compensating them for damages ensuing from their forced displacement.  The decree should provide for the formation of a high commission for the development of Lake Nasser, as dictated by the Constitution. We further call on the Egyptian state to stop viewing and misrepresenting Nubian activism as separatist or a security threat; and immediately bring the prosecution, maltreatment, and intimidation of Nubian activists to an end.