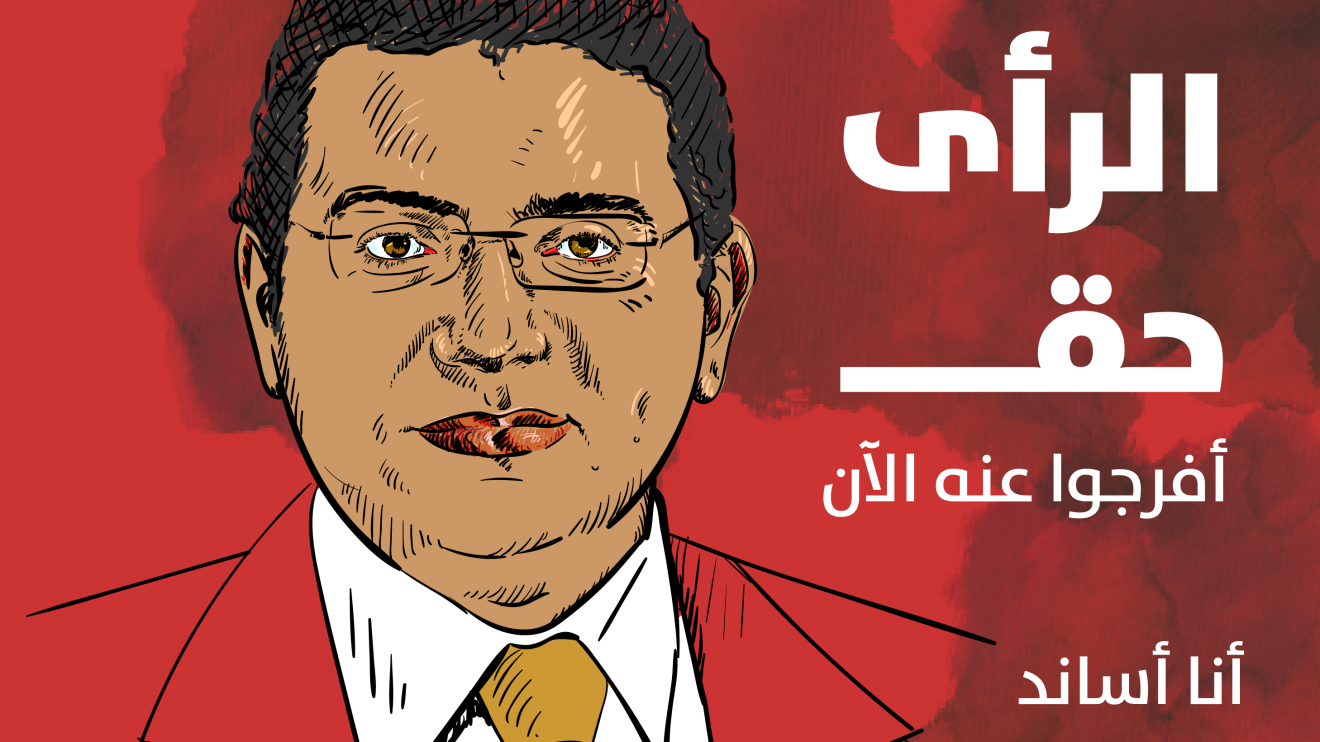 Circuit no. (15/Terrorism) of North Cairo Criminal Court is looking today into remanding Ismail Alexandrani, who is only days away from turning a whole year in prison. The young journalist and researcher is still far from his work, articles and research as he spends a no-sentence lock up at the Tora Prison Complex. Alexandrani, who is an expert on Sinai, is still far from his wife, family and friends. The journalist nominated for the Journalists without Borders prize is still far from the activities he is most passionate about in life such as writing, field research and documenting everything that has to do with human rights.

State Security Agency officers arrested Ismail Alexandrani once he arrived at the Hurghada International Airport on 29 November 2015 after he flew back from Germany. He was referred to the Supreme State Security Prosecution for investigation, where the prosecution leveled charges of 1) joining a group established in violation of the law (the Muslim Brotherhood), 2) promoting the purposes of the group named in the previous charge with knowledge of what it advocates and 3) disseminating false news (concerning his research and articles on the socioeconomic conditions in Sinai).

Alexandrani is a fellow researcher at Paris-based Arab Reform Initiative and he studies the future of the relationship between Islamists and the secular left in Egypt. He is a researcher who focuses on Sinai Affairs as well as a freelance journalist whose articles and papers are published in several local, regional and international newspapers and websites. Alexandrani has always had his differences and disagreements with policies and methodologies of the Muslim Brotherhood, a fact he demonstrated during the investigation at the Supreme State Security Prosecution. Alexandrani’s articles and papers on the situation in the Sinai Peninsula only express the facts and the poor living conditions the citizens in Sinai suffer from ever since military operations started to purge Sinai of terrorism. Hence, rather than restricting his freedom, the government should have dealt with the inputs and facts documented and published by Alexandrani so as to find solutions to the poor conditions which Sinai has been enduring for decades.

Leveling charges such as joining an outlawed group at Alexandrani or at others in his legal situation could be a cause enough for his or their remand to continue for two whole years, without referring the suspect(s) to the competent court. Remand pending investigations, whether it was long or short, is not a presumption or a cause for indictment, as remand is restricted to certain reasons specified by the legislator so that the prosecution would not encroach upon the suspect’s rights, especially that the Public Prosecution enjoys the two prerogatives of investigation and indictment. Therefore, when the chief prosecutor or the investigating judge decide to detain the suspect in remand pending investigations, this is done either to ensure safety of the suspect (such as cases of honor or vendetta), or to avoid the suspect’s influence over the course of investigations through tampering with evidence or influencing the investigation authority (such as the suspect being a businessman who enjoys leverage). The investigator might decide to remand the suspect out of the apprehension that the suspect may escape upon release or when the suspect does not have a fixed and known place of residence, which is a possibility that does not hold in Alexandrani’s case. If Alexandrani had intended to escape, he would not have returned to Egypt on his own free will to practise his normal life. Moreover, concerning the tampering with evidence charge, among the alleged evidence of Alexandrani’s case are refereed articles and papers, which are published and publicly accessible. Therefore, tampering with them is unthinkable in the first place. Therefore, if not as an abusive measure against the young researcher, why opt for remand?

The joining an outlawed group charge leveled at Alexandrani by the public Prosecution is only supported by investigations by State Security Agency as it lacks concrete evidence. Such investigations, according to the Egyptian Court of Cassation, express nothing by the sole opinion of that who carried them out, and is not valid that security investigations be the ground on which the prerogative of indictment bases its leveling of charges at an individual. The aforementioned reasons of remand are, therefore, not present in Alexandrani’s case, as he has a known location of residence and he has no influence whatsoever to affect the authority of investigation. Moreover, he returned from Germany having known that an arrest order had been issued against him, which, therefore, negates any intention to escape upon release. Moreover, the moral and material harm caused to Alexandrani’s family by his arrest and detention for a year cannot be turned a blind eye to, as it is likely that his remand might exceed a year, because of the Code of Criminal Procedure which grants the investigation authority of such lawsuits a prerogative that represents a violation of an individual’s freedom.

The charge of disseminating false news is among the charges pending which a journalist cannot be remanded. Therefore, it was coupled with the charge of joining an outlawed group. What Alexandrani is being subjected to is described as abusive remand, which aims at exploiting flawed laws to keep a suspect detained for as long as possible without referring him/her to their normal judge, as it is likely that the judge may issue an acquittal given the fact that the lawsuit is only based on security investigations. Moreover, the Public Prosecution, which is an authority of investigation and indictment, has been postponing investigations without any probable cause, as Alexandrani was only investigated with twice on the course of a whole year, while the rest of the trial sessions are remand renewal sessions which do not exceed five minutes. Abusive remand and unjustified delay of investigations constitute a violation to the guarantees of a just and fair trial which is required in all international covenants and agreements of which Egypt is party and signatory, as they state the presumption of innocence in each individual so long as an ultimate and incontestable ruling of indictment has not been issued against them.

As of this writing, none of the lawyers on Alexandrani’s defense team has been able to photocopy or even read documents of the lawsuit. They have not been able to appeal against any of the remand orders issued against the young researcher, which count 12 including the last renewal on October 8. In that last session, the court ordered his detention for another 45 days pending investigations. Therefore, the main charge leveled at Alexandrani with joining an outlawed group is lacking, as the lawyers were not allowed to read documents of the lawsuit, which further breaches the guarantees of a fair trial.

Intransigence of the Supreme State Security Prosecution through hindering lawyers from pursuing the work they are entitled to under the constitution, the Code of Criminal Procedure and the Advocacy Law could only be justified by the absolute power this prosecution specifically enjoys given that it investigates into a certain type of crimes potentially infringing national security.

None of the comparative criminal legislations accepts the remand system except within the narrowest bounds. Therefore, remand has become an exception in all criminal jurisdictions. Several alternatives to remand are available, such as precautionary measures or community service, as remand is solely dependent on the concept of concretely evident criminal danger, whether existing or not, as a component of the suspect’s personality. Alexandrani is not a criminal and does not constitute harm to security as all he did was writing. Moreover, until this moment, he has not been confronted with any evidence other than investigations by the State Security Agency.

In this context, those in solidarity with researcher and journalist Ismail Alexandrani launch a massive campaign that calls for his release and defends his right and freedom of opinion. The campaign starts on 22 November and ends on 29 November, which marks a year after his arrest and renewal of remand based on false charges.