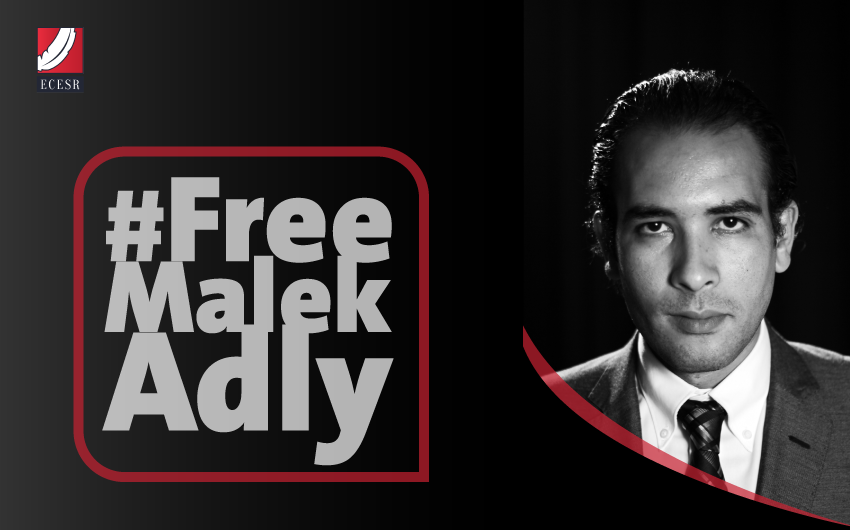 HRD and Lawyer Malek Adly, Sayyed El Banna and Sayyed Gabber have been remanded in for 15 days for the third time in a row. The charge pressed is spreading “rumors” that the two islands handed over to Saudi Arabia, Tiran and Sanafir, are Egyptian islands.

As the detention is renewed, today marks 40 days for Malek Adly’s remand in solitary confinement, which violates the Egyptian Constitution, the Prisons Law and the Prison Regulations.

The Egyptian Center for Economic and Social Rights (ECESR) publishes the speech Malek gave from behind the bars yesterday before his judge at Shoubra El Khaima II Court as quoted by his wife, Asmaa Aly:

I don’t want you to set me free. I know that this is a price I have to pay. All I’m asking for is to be treated like any other prisoner, I’m being mistreated as if I’m an Israeli spy. You know what…I want to be treated like any of them, like “Hesham Talaat Mostafa” or like any drug dealer or money corruption prisoners. I am Egyptian I swear to God. I am 35 years old and father to a two years old girl who I want to see grow.

I’ve been denied to see sunlight for the past 40 days, except while I’m being transferred to court to attend my hearing sessions. My physical condition is terrible due to sleeping on the floor. I only get to sleep for only three hours full of the worst nightmares. Knowing that if anything bad happens to me, no one will be able to save me, and as a result, I can’t get to sleep.

I asked the prison administration to remove all the medications I have in my cell, as I’m afraid to commit suicide. I am very likely to do this any moment. Tell me what you want from me. Is this your objective, for me to cut my veins? [Addressing the judge] I can’t find anyone to talk to except you, and I can’t bear these conditions anymore. Again, I’m not saying this because I want you to release me. No, no and no. I’m telling you that I want to be detained and all I want is to be treated according to the law and the prison regulations during my imprisonment.

Malek’s attorney filed a complaint to the Head of the Prisons Authority requesting several demands for his client regarding ending the abusive measures taken against him in his remand pending further investigations.