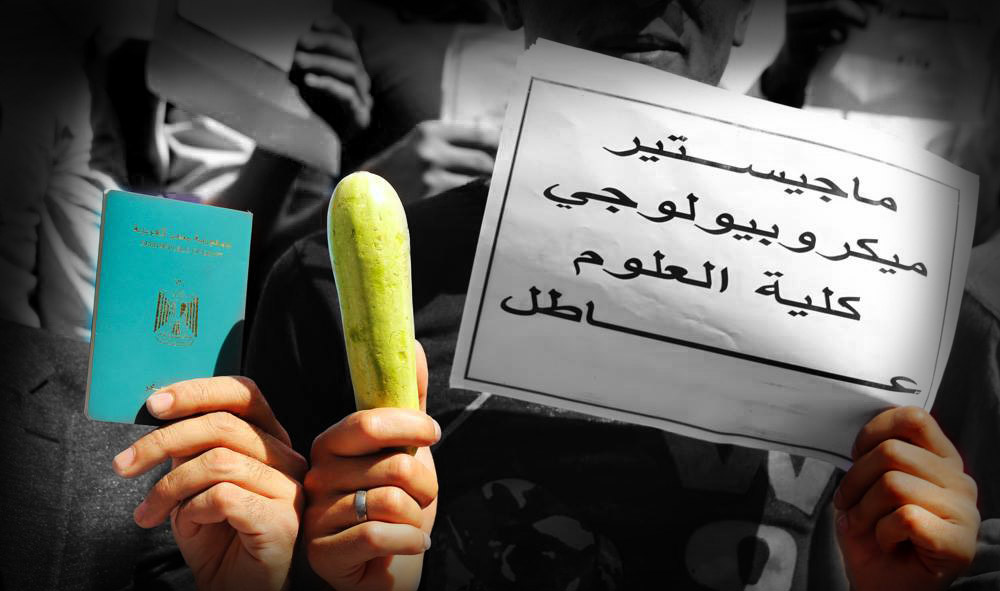 “Master and PhD holders will not let go of their rights”

(Some of the chants of the postgraduate protesters)

They consider that the ‘employment contest’ which the state organizes to hire is only suitable for those who enjoy wealth or cronyism.

Over the past few months, postgraduate protesters have been practising their right to demonstrate and protest peacefully, as they protested over 30 times (about once every week) since they started in August 2015 until the police arrested 32 of them on 29 November 2015 from their protest in front of the Cabinet building. 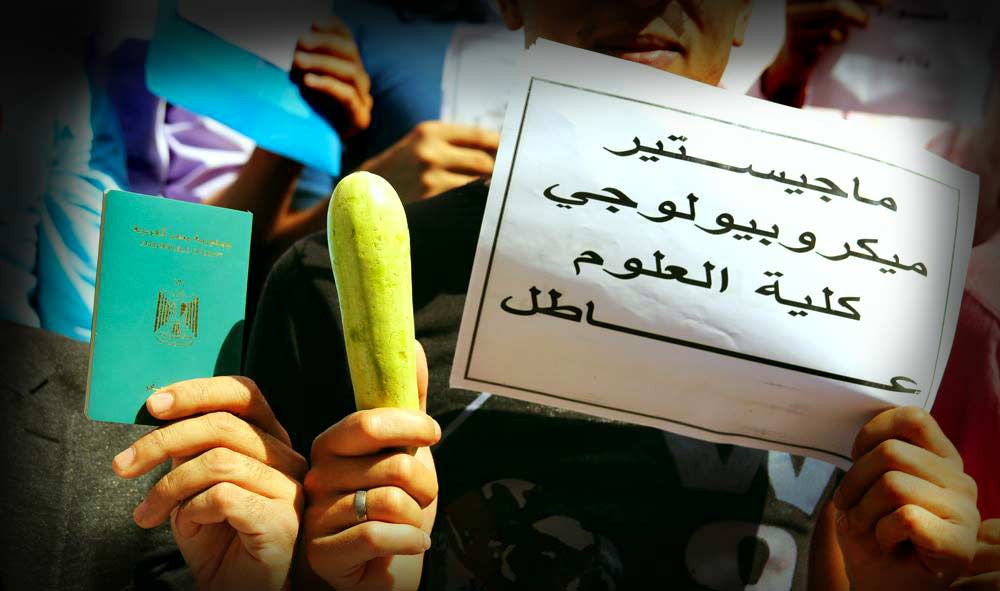 A protester holding a poster that reads “MSc on Microbiology from the Faculty of Science, UNEMPLOYED”

Attempting to call attention, especially that of both the public and government officials to their cause, they were most creative in their use of different forms of peaceful protest. To express their resentment of the government’s lack of response to their demands of employment in administrative and government posts like the 2002-2014 classes, some of them were dressed in execution clothes, coffins and zucchini (the symbol of cronyism in Egyptian culture). They announced they would escalate by going on hunger strikes and sit-ins. The variety was not restricted to their means of expression as their places of protest varied as well. They protested on the stairs of the Syndicate of Journalists, in front of the Cabinet building, the Ministry of Justice, the Ministry of Planning and the Central Agency for Organization and Administration.

Since the beginning of October, the postgraduate protesters escalated as they organized a human chain in front of the Lawyer’s Syndicate raising an Egyptian flag that exceeded 100 meters long. By the third week of October, they were on a sit-in on the stairs of the Syndicate of Journalists holding posters that read “Master and PhD holders will not let go of their rights”, “A Master’s degree equals unemployment” and “We are the elites of education”. 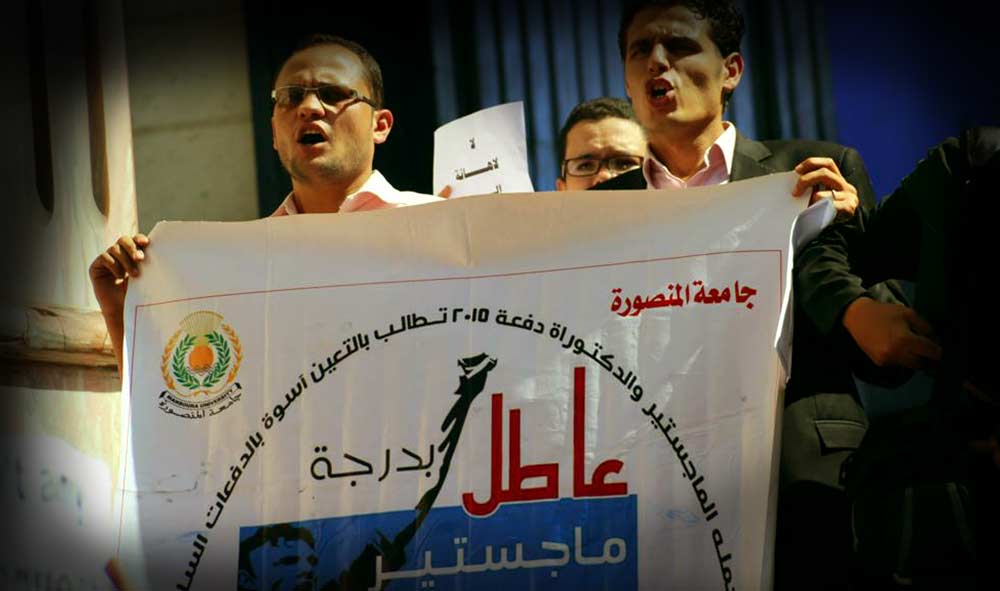 After the Cabinet made them a promise that was never kept, as they were not employed, they protested in front of the Cabinet describing the Civil Service Law as ‘unjust’. In their protest, they distributed an application that includes the data of their requests and petitions of employment, along with the serial numbers of petitions. Security forces dispersed the protest and arrested a number of the protesters who come from outside Cairo and have to travel on weekly basis to Cairo to protest. They were all released on the same day, except for Dr Mahmoud Abu Zaid, general coordinator of the protests who was charged with ‘inciting protests’ before he was released on December 1 on bail of 5,000 LE. 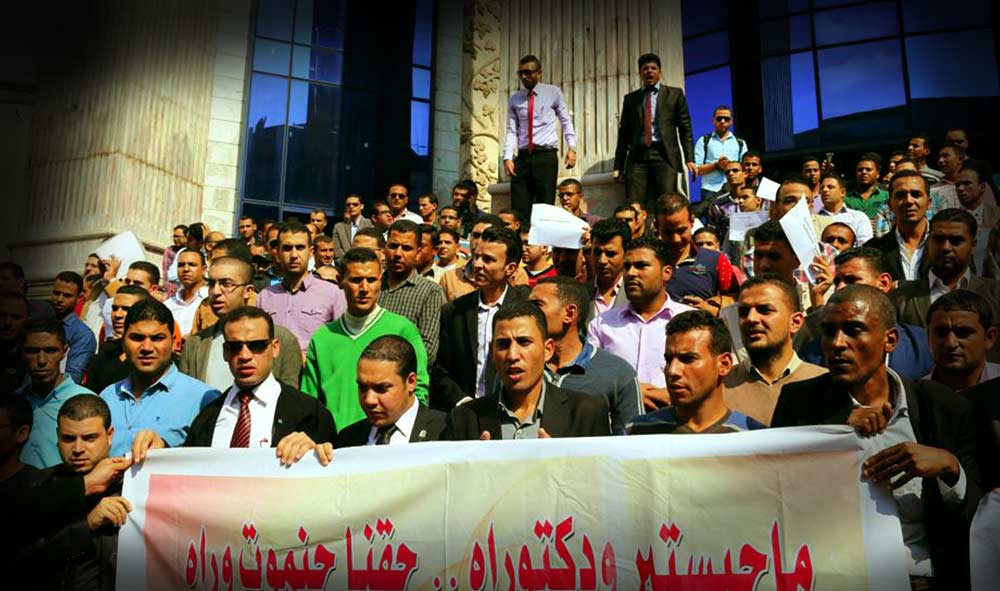 Such treatment lead some of the youth into despair. Gamal, a 32-year-old protester who comes from Gerga, worked in Saudi Arabia and returned home after the January 25 Revolution in the hope that the Revolution restored the lost dignity. He obtained a master’s degree in Sociology that was however useless, since it could not guarantee him a job opportunity. After he was arrested in the last protest, he was so desperate, especially at the government’s lack of response and had committed suicide by jumping out of his second-floor window, and he almost died.

Regarding creativity, are we going to witness movements of a different sort aiming at changing unjust conditions? Or creativity would be witnessed only in newer forms of suicide attempts because the government is only good at ignoring demands?