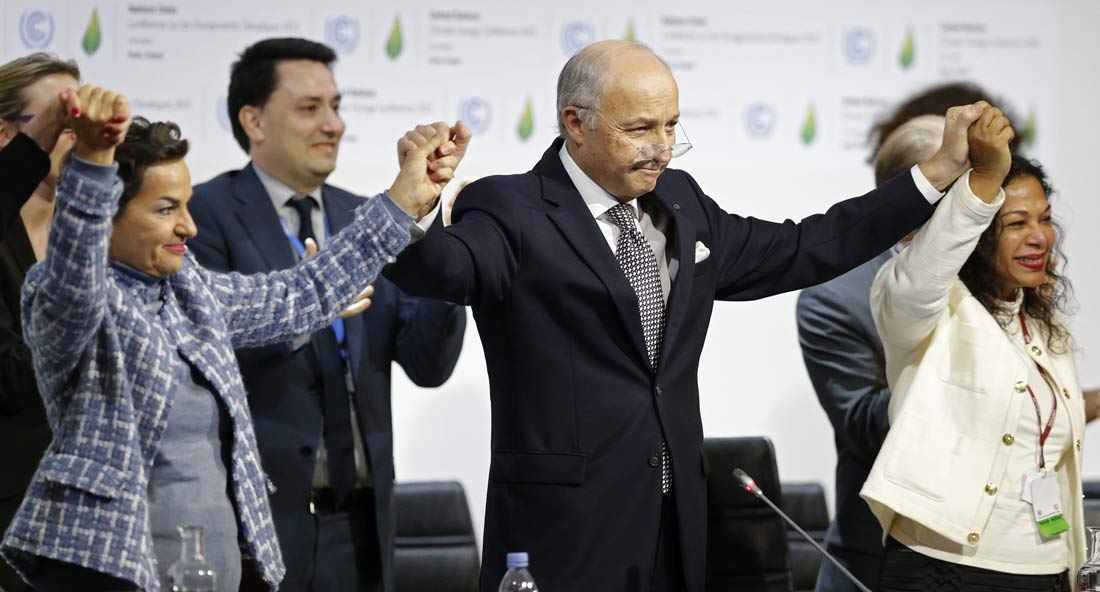 After about 21 years of negotiations, 195 parties signed yesterday an agreement on climate change. Negotiations ever since the Kyoto Protocol in 1997, failed to arrive at a binding agreement, especially that many member states have not committed themselves to reduction. However, the Paris Climate Summit opened the door for serious attempts towards climate change.

The Paris Agreement states that emissions should be reduced to guarantee that the global temperature increase is held well below 2 degrees Celsius, and to remain in the level of 1.5°C. Regardless of being a very ambitious target that exceed most expectations, it lacks an accurate timeline. The agreement states that parties aim to reach global peaking of greenhouse gas “as soon as possible”. It also states that it is necessary to reach the global peaking of greenhouse gas emissions, and limit the increase in temperature to 1.5 °C above the pre-industrial levels by the mid-century.

Regarding the method adopted to reduce emissions, the agreement was based on reducing the use of fossil fuel. However, it did not mention reducing the production. This might be problematic in cases of the fuel-producing countries that may continue extracting fuel without being subject to any legal accountability. The agreement refers to the necessity of resorting to renewable and sustainable energy in order to reduce emission. It also mentions how important it is to support this choice away from fossil fuel and more towards renewable and sustainable energy through investing and financing to pave the way for a more sustainable world. 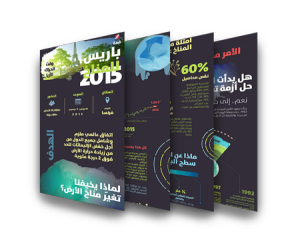 Infographic on Climate Change and the Climate Summit

For the First Time: A legally binding agreement

The agreement is legally binding in regards of reducing the greenhouse gas emissions. However, it is not binding in regards of financing the adaptation projects of catastrophes resulting from climate change in developing countries. The negotiating parties settled on a USD 100-Billion annual finance for the Adaptations Fund to be distributed among the developing countries according to the need. Experts propose that this number is totally far from the real calculation that would enable the counties subject to consequences of climate change to adapt. This number comes as a result of the negotiations of the 2008 Copenhagen Climate Council, which was not appropriate at the time, and still is in today’s criteria. However, financing the Fund was hindering the agreement. This pushed many negotiators to adopt this number and accept the non-obligation of  advanced countries – countries with the bigger shares of emissions –to be accounted historically for financing the Fund to reach an agreement. Even though the agreement exceeded most ambitions, many coastal and developing countries are still subject to the negative impacts on low coastal lands as they are subject to floods and food security fluctuation.

Egypt’s stand is still unclear. Although Egypt has signed the agreement, the possibility of achieving the aim of it is still unpredictable, especially that some policies are still adapted to this day. According to statistics in 2014, Egypt comes first in having the most emissions in Africa, second in the Middle East and 25th in the whole world. The Egyptian developmental goals for the decades to come do not indicate that any reduction is to be expected soon, especially after the decision to use coal in the energy mix, which is, undoubtedly, going to increase emissions.

Future of the agreement

Generally, the Paris Agreement is considered a positive step down the road to reduce emissions and protect the coming generations from the consequences of climate change and degeneration of resources. The agreement entailed several economic solutions that would realize the goals stated in the agreement. However, it failed to lay out a specific timeline, which could suggest the possibility of some of the signatory countries’ dodging of responsibility. The agreement also neglects many of the climate-related catastrophes that will result from and cause climate change to some of the poorest communities in the world. Climate activists around the world call for paying attention to the needs of developing countries that are most subject to the climate change results which are neglected in the agreement. They also call for the advanced and most polluting countries’ being the most historically accountable. The question of how to finance the Adaptation Fund is still posed as a key point that negotiators must address in any following negotiations.