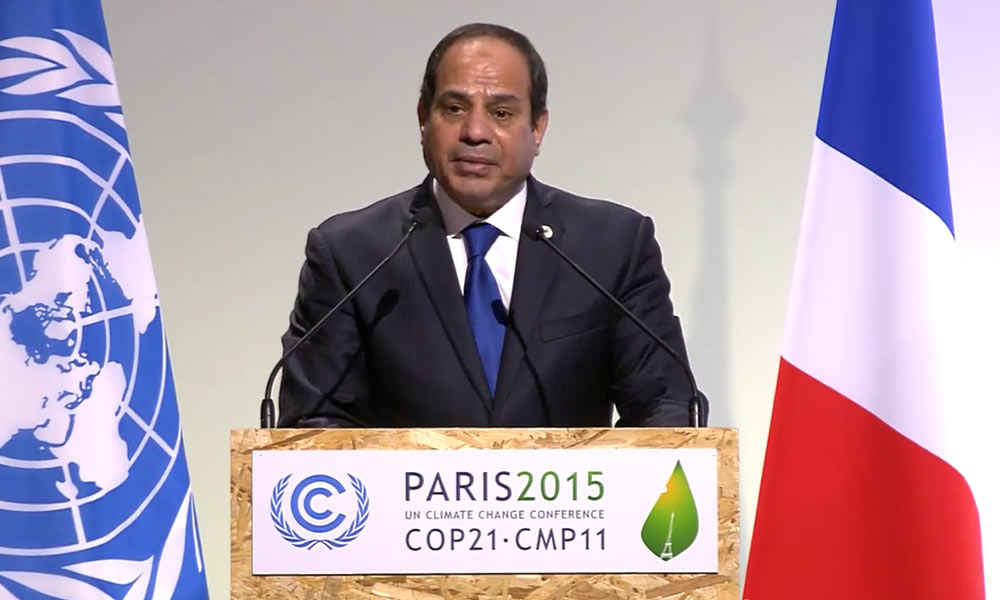 In his speech on the first day of negotiations on climate change yesterday, President Abdulfattah El Sisi, Coordinator of the Committee of the African Heads of State and Government on Climate, stressed the responsibility of developed countries in reducing the emissions, updating the technology and financing the adaptation procedures in accordance with climate change consequences in the countries that are most subject to it. His speech comes in contradiction with Egypt’s contribution into reducing emissions and with Egypt’s Development Plan.

While Sisi speaks of the common responsibilities to reduce emissions and consequences of climate change, the statement generally stated that the developed countries must bear the bigger part of emission reduction burden, and burdens of financing the adaptation procedures and of moving the technology to African nations and developed countries. However, the statement included no clear participation of the Egyptian government to reduce its emissions. Sisi mentioned the contributions, which include no clear goals to reduce emissions and does not entail a specific plan on how to use international financing to reduce emissions or adaptation procedures. Therefore, receiving the funds becomes infeasible in the most optimistic scenario. This also poses the question of distribution justice regarding the funds allocated for adaptation in the affected sectors.

Laying out a plan to guarantee holding the increase in the global average temperature well below 1.5°C above pre-industrial levels

The Intergovernmental Panel on Climate Change (IPCC) report states that it is necessary to gradually reduce the use of fossil fuel until phasing it out by 2100 to keep the global temperature increase below 2°C. The president called for an agreement binding to all the countries that guarantees that the increase in global temperature is held well below 1.5°C. Regardless of how positive this point is, Egypt’s developmental plans still include the use of coal in the energy mix, does not include any real efforts to switch to renewable energy, and is not consistent with the IPCC’s report of holding the increase below 2°C, not to mention the 1.5°C increase which the president mentioned in his statement.

Sisi, among other presidents, gave statements about the binding agreement which is going to be signed in the convention in Paris and are expected to put an end to the climate change challenge. This challenge represents one of the most dangerous challenges the whole world is going to face in order to avoid the conflict over resources. Developed as well as developing countries are not going to be able to evade that conflict. However, no agreement that exempts developing countries from taking part in reduction will be signed. The 2008 Copenhagen Climate council was inappropriate as some countries avoided taking responsibility in reducing the emissions. To avoid the same scenario with the negotiations in Paris, all countries must present serious and ambitious contributions, bearing in mind distribution justice, as more detailed and aspiring promises have to be presented by Egypt and the African Committee for the negotiations to succeed.

The statement seems relevant to the spirit of the conference and the importance of the event. However, the contradiction between it on the one hand and the developmental plans Egypt presented and the Egyptian policies on the ground in fields that include energy and industry on the other hand is still an obstacle in the road to successful negotiations. The next few days of the conference will witness revealing how serious the promises made are, especially in the light of the concerns and ambitions which the speakers reflect through their opening speeches as well as the agreements they reach behind closed doors.

Administrative Justice Allows ECESR to Appeal against Constitutionality of NGOs Law
Release Ismail Alexandrani and All Prisoners of Conscience: Societies Are Built with Freedom – Joint Statement