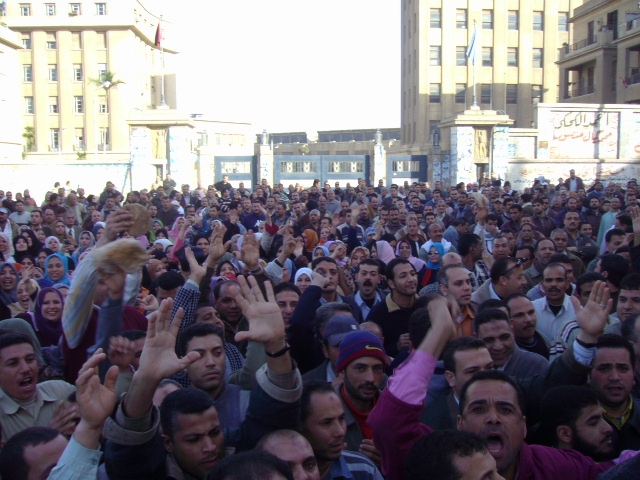 In solidarity with the striking employees of Misr Spinning and Weaving Co.

Workers have been receiving their allowance according to the regulating law at the beginning of every fiscal year for long. Issued in the last year of Mubarak’s reign, law 70/2010 states that state employees collect 10% of their salary as allowance. The law also indicates that the allowance included employees in business and public sector companies. Laws passed in the subsequent four years acknowledged the raise for the same aforementioned groups.

Among these subsequent laws are decree 2/2011 and law 82/2012 that both state that the raise be increased to 15% of the salary. However, the percentage was reduced to 10% in laws 78/2013 and 42/2014. All the aforementioned laws, until September 8, 2015, state that state employees in general, along with public and business sector employees, collect the allowance. Law 99/2015, passed in September 8, 2015, states that the annual social allowance be retroactively collected by those which the Civil Service Law (18/2015) does not address.

This law excludes only those addressed by the CS Law from collecting the raise, and it does not exclude employees of the public or business sectors. However, it never states explicitly that this raise be given to employees of neither sectors, unlike previous laws. Employees in both sectors consider the raise a convention. According to this law, some of the holding companies give the employees 10% of their salaries as allowance, such as the Holding Company for Food Industries, the Metallurgical Industries Company and HoldiPharma. All these companies are subject to the 203/1991 law (business sector employees law), which also includes the employees at Misr Spinning and Weaving Co.

By issuing the 442/2015 by-law, Hany Demian, the Egyptian Minister of Finance, has obviously misinterpreted the 99/2015 law which regulates the collection of the 10% allowance by the non-addressees by the CS Law, regardless of taking minimum or maximum wages. Demian excluded the business sector employees by his misinterpretation, as his by-law states that the allowance be collected by all permanent or temporary with-full-benefits employees, in the state administrative apparatus, local administration units and public office, as they are not addressed by the CS Law and as they enjoy their own laws and by-laws which regulate their work. Depriving business sector employees from this allowance is unjustified, as the latter by-law excludes the addressees by the CS Law through subjecting them to wage scales that were applied on the 1st of July, 2015.

The ECESR asserts that the workers affected by the Minister of Finance’s by-law have the right to appeal against it before administrative courts, and that it would be abrogated by the Council of State in case the by-law is not amended by the Ministry.

As their children were about to start the new school year and prices went high, the Misr Spinning and Weaving Co. workers resorted to a strike to collect the special allowance.

The strike started as they received their salaries short on the allowance on the 17th, 18th, 19th and 20th of November. The company management had promised the workers earlier to collect the raise. Therefore, they were surprised at not collecting the social allowance, as that contradicts the presidential decree. In protest, the workers refused to collect their salaries, and gradually, however, it developed into a full strike that started on October 17th, 2015.

“Work has been going on for the past months in all factories of the company, and it hasn’t stopped ever since,” the commissioner-general at the company said, “the company did not receive any provisions or requests to pay the workers any social allowances”, he added. His words caused a rage among workers in the company’s many sectors and the situation escalated as they started a production strike.

In another context, the company issued a note on October 19 indicating that the workers are non-eligible to a social allowance and it also indicated that the law is non-applicable on the company’s workers. The strike was therefore their only chance, especially after other companies paid the allowance.

The Misr Spinning and Weaving Co. management decided to suspend a number of labor leaders for an indefinite period and investigate with them for allegedly inciting labor strike. Among the suspended are Adnan El-Sherbeeny (the Korian Factory), Mustafa El-Alfy (wages department) and Mohamed As’aad Morsi (the Weaving Company).

The snowball started with the Spinning and Weaving workers in Elmahalla and kept rolling to include workers from other companies. On the 25th of October, 8000 Spinning and Weaving workers in Kafr El Dawwar announced an open strike in solidarity with Elmahalla workers and a protest against not collecting their allowance as well. Egypt Flax Fiber company in Tanta paid its workers the 10% allowance according to the presidential decree. However, the company received a notice from the Ministries of Investment and Finance on Thursday the 22nd of October stating that, according to the minister of finance’s by-law, the payment of allowances was done by mistake and that the allowance money should be refunded.

The Egyptian Center for Economic and Social Rights (ECESR) calls on the Egyptian government to stop practising economic policies which proved to fail in most countries and to stop fighting the poor by imposing tax systems that do not take into account the minimal social justice the workers deserve. The ECESR also calls on the ministers and officials in the government to practice austerity measures as they so preach their employees and workers. We also advise against the legislations and policies marginalizing those with limited income and failing at controlling prices, as this would definitely bring about a social blast.