As an agent of the State Council employees, who were work suspended for two months, the ECESR brought 25 challenges before the Supreme Administrative Court against both the Minister of Justice and the President of the State Council in their capacity, for overturning the judgment of the Disciplinary Court of Presidency. The court had earlier rejected the appeals filed by the staff to challenge in form and substance the suspension decision, which is deemed as contrary to the provisions of the law and the Supreme Administrative Court’s rulings.

However, the President of the State Council issued the decisions No 174, 175 186 187, 227 for the year 2013 to suspend 43 employees out of 800 for three months with discharging a half pay during the period of suspension. The decisions were based on the complaints submitted by some judges. Later, he issued the decision 254/2013 on June 18, 2013 to reduce the period of suspension to two months.

Since these decisions had been issued without any grounds or reasons showing how to choose specifically the employees to be suspended and brought to investigation as well as suspending half of their pays. Needless to say, the disciplinary court decided on the suspended half salary to be paid, but the decision was not executed.

The challenged ruling was handed down to end the hopes of the employees to ward off the damage they have suffered over the past months. Therefore, they resorted to the Supreme Administrative Court to decide on the case.

It is worth mentioning that the disciplinary court in Assiut had overturned, on Jan 21, 2014, the decision No. 187 for the year 2013, which suspended 8 employees. Paradoxically, the Disciplinary Court of the presidency in Cairo rejected on Dec 31, 2013 hearing more than 60 challenges submitted by the Council employees in violation of the provisions of Article 83 of the Civil Servant Act. 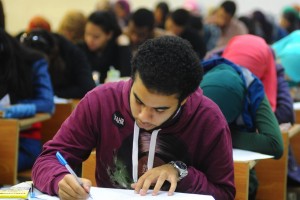