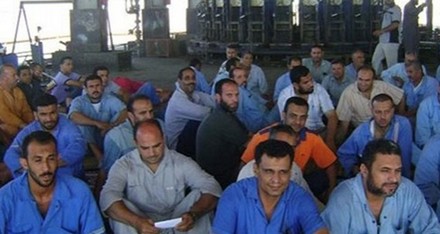 Today 109 workers from the Suez Global Company for Nitrates “Cinco” went on strike and prevented the product to be taken out of the company’s headquarters in protest against the management’s ignorance of their strike. The strike was specifically scheduled for Feb. 15 by the General Assembly of the company’s independent union that was held last February.

The independent union chief Mohammad Zakaria Al-Gammal confirmed that the company had shipped part of the products out of the company before the workers prevented the remainant products to be taken two days before the date of the workers’ strike. It means that they have the intention of not fulfilling the demands of the workers, namely:

Al-Gammal confirmed that they had told the company administration with the date of strike as well as notifying the workforce office. In response, a workforce inspector attended on February 11 and wrote down an official report to prove the case of the workers’ demands and made sure of the eligibility of their demands.

When the workforce inspector asked the financial and administrative director of whether he is authorized to implement the demands, he said he was not conferred to take a decision.

Al-Gammal added: “the workforce inspector asked the Managing Director to contact the Saudi investor. When the Managing Director asked him about what he knew about the demands of the workers, the investor said that he knew all about them and they were under review. When asked to mandate an administrative official to resolve the problem and implement the demands, the investor rejected.  He also refused to come to the headquarters of the company in Egypt to negotiate personally with the workers. The workforce inspector wrote down an official report to prove the case and we got a copy of it.”

Al-Gammal said that one of his colleagues had died a few days ago and a death benefit had not been disbursed to his family until now.

He added that they filed an official report in Ataka police station with number 286 for the year 2014 administrative Ataka. At the same time the company submitted an official report against the workers on charges of disrupting shipment and preventing others from downloading the product.

It is noteworthy that the global Suez Company for nitrate produces ammonium nitrate which is used in the manufacture of explosives.

Media Report on Labor Lawsuits Lodged by ECESR During December 2013 and January 2014
In January 2014: Doctors Spearhead 55 Protests in Egypt